One of my favorite items to show and discuss at our talks and teas, is a box of Georgia Belle Graber’s calling cards. Calling cards were the forerunners of today’s business cards. As she became “Mrs. Clifford Clement Graber” in 1907, and I was marrying his grandson and namesake in 1990, the box of cards, along with the copperplate for engraving, was an engagement gift to me from my late-mother in law, Betty Graber. Stop in and ask about them! 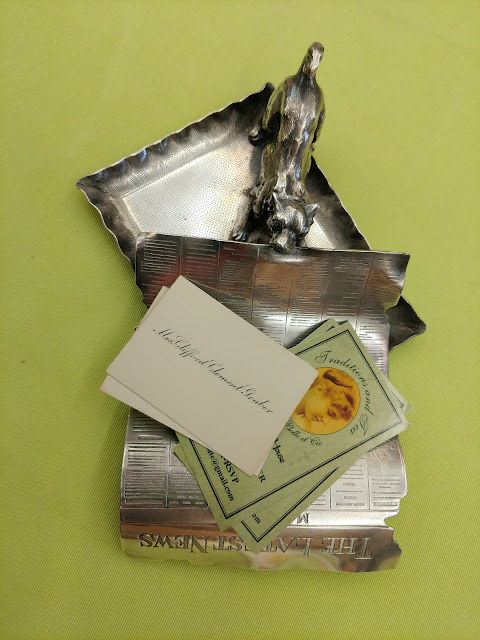 Pictured above and below– Georgia Belle Graber’s Edwardian era calling cards from 1907, sitting in an antique Pairpoint silver, calling card tray, atop two business cards for “Georgia Belle et Cie.” The tray features a tenacious dog who does not wish to give up the newspaper he has snagged and holds in his teeth. The newspaper is dated May 4, 1891 –
“
On a reception day or at a tea you should leave your cards in the card tray in the hall on your departure. No call is necessary in acknowledgment of an afternoon tea. A card left or sent to a tea discharges the obligation.“ ~ from the Los Angeles Herald, 1891 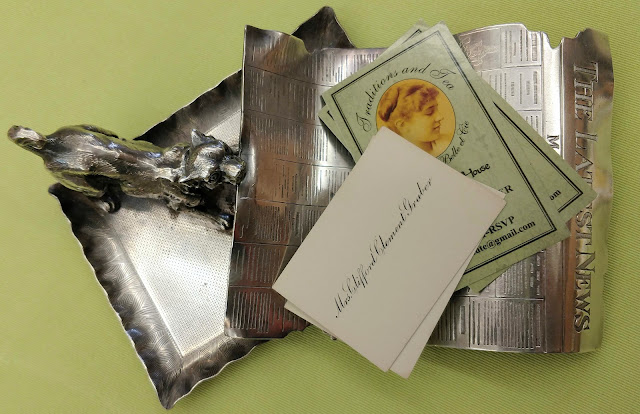 “The wise woman carries cards with her wherever she goes, for there are many uses for them. Nowadays, she carries shopping cards also, and saves time and trouble when she makes purchases. A neatly engraved card is always in good taste, even when not strictly up to style, but a careful woman is modish in that, as in every other detail of her toilette.”

“Sometimes I open letters to find that the desired information would be too late. That happens when social functions are looming up in the near future, and somebody has met a puzzling situation. Generally, such letters ask for information on the subject of visiting cards or notes of acceptance or regret. There are only a few rules governing the etiquette on such occasions, but they are important. Every woman should know them, even though she has no occasion for such knowledge. We learn a good deal which is never put to account, you know.

“When a woman calls upon a new neighbor, she carries a card for each woman in the family and her husband’s cards as well, with one for the masculine head of the house. That is only for the first call; which is returned in like manner, and then the acquaintance is purely a matter of individual choice. The demands of etiquette have been met. Cards are convenient things even after terms of intimacy have been established, for they serve as reminders of visits whigh might be forgotten or might never be known. The wise woman carries cards with her wherever she goes, for there are many uses for them. Nowadays, she carries shopping cards also, and saves time and trouble when she makes purchases. A neatly engraved card is always in good taste, even when not strictly up to style, but a careful woman is modish in that, as in every other detail of her toilette.

“Letters of acceptance or regret are imperative, and shortcomings in this line are never overlooked. The sender of an invitation has a right to expect the courtesy of a reply of some sort — and the nature of the reply has much bearing upon the success of the function. In wedding invitations, the answers are sent to those who issue them, no matter whether there is an acquaintanceship or not. For instance, the parents of a bride send many such to friends of the bridegroom, persons they have never seen, but answers are due them just the same.” –Betty Bradeen, 1909

This past winter, a friend and I decided we’d love to offer talks on  a variety of subjects  at the Graber Olive House. Earlene Freeman... 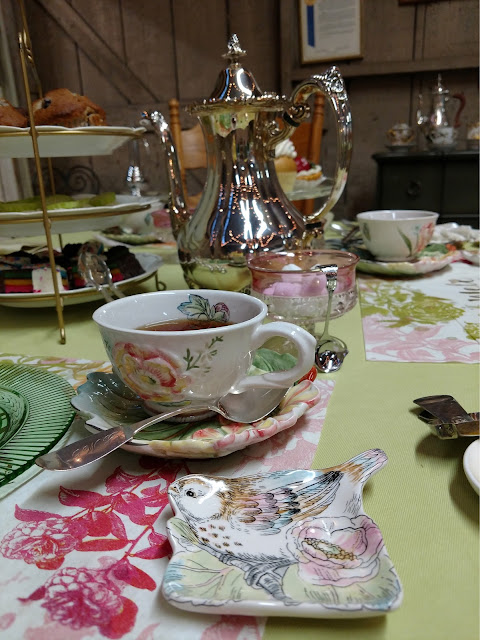